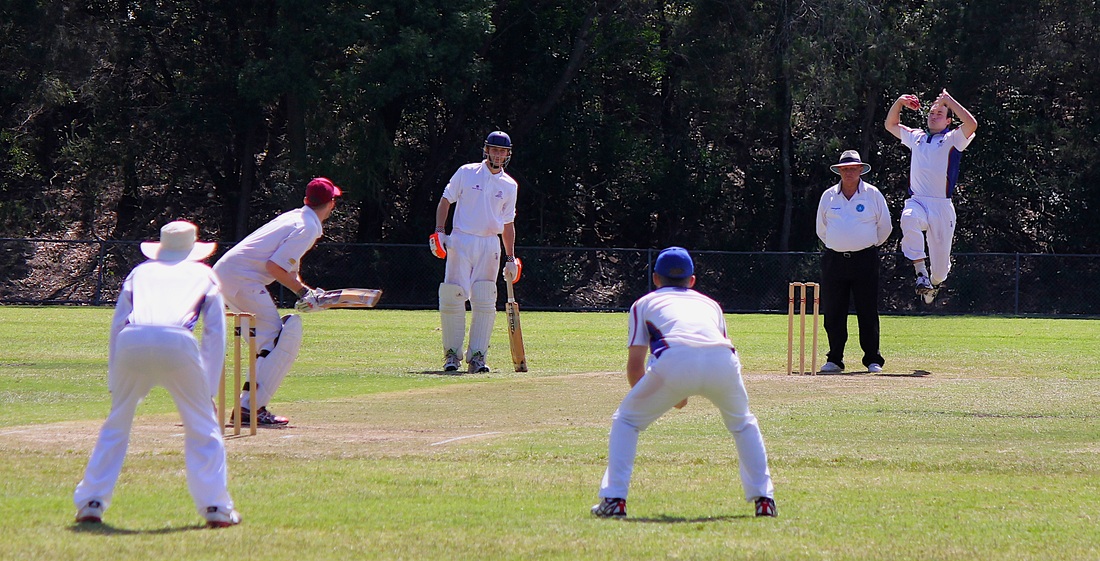 This season there has only been 4 tons scored. Compare this to the 9 last season and our record 23 in 2012/13 season.

The bowlers though are dominating. They are also on track to breaking some long standing Club records if the momentum can be maintained.

To show the significance of these results the all-time Club records for these Grades are:

So at this late stage of the season we have 6 players within touching distance of all-time Club records. In D2 Grade there are an amazing 2 bowlers on track to break a record standing since 1983/84. Not playing this weekend?

Steve Quanborough (C2 Blue and pictured) keeps me up to date with all the fabulous Youtube videos releases by The Grubs Cricket Club.

We always manage to get 11 players on the field but what you don’t see are the countless hours our Captains go through to sort Teams leading up to some games due to late withdrawals. What is even better is the occasional grumbles we get from players who pull out at the last moment and who are not chosen in future games.

As mentioned, we are pretty good compared to many Clubs but have a look at this video and in your quiet time see if it applies to you or un-named team mates – here This week we have a double act – Connor Hindmarsh (left) & Dylan Bish who play C2. The photo was taken at James Park back in November 2016 when the boys were playing in the U15s. Also in the photo is a random player who plays a bit of cricket – someone might be able to help me with his name – he might be in Brisbane at the moment.

Both Connor & Dylan are a couple of our young stars – both on and off the field. The boys could play higher Grades but play in the same Team as they are mates. As an U13, Connor won the prestigious Charles Booth Memorial Trophy in 2014/15 and Dylan has been one of our top all-rounders since he started playing Seniors.

When the time comes for the boys to move to higher Grades watch their progress as they become future stars and Club Leaders. Last week we had a story on the loss of a dear friend – Peter Lees’ (C2 Blue) cricket bat that gave up the ghost after years of faithful service. To quote a clearly upset Peter:

The bat “was assessed as having terminal fractures”

After an impassioned plea to help Peter out for the rest of the season by his Skipper (Buzz Burrows) we put out a call out for help.

Within hours of this emergency News Release, to the rescue came a message from one our long term former players – Peter Heidegger (pictured) who offered Peter his own bat he used as a run scoring machine when he last played C2 regularly in 2014/15.

Thanks to Peter H’s generosity to help out in a time of need, the C2 boys are now back on track for another tilt at the Premiership.

On a separate matter – a message to Peter H – how about coming back to play – you are a long time retired. Coin Toss – the un-broken run comes to an end

Come Round 7 in the Sheep Station Trophy game and Stu came out to toss the coin against the experienced Buzz Burrows. Buzz used all his experience and thought after 22 straight wins that run had to come to an end and let Stu test his luck on calling 22 consecutive Heads.

If Stu had won he would have cracked odds of 2,750,000 to 1.  Without doubt this is a Club record and most probably the highest number of straight wins in the world history of cricket coin tossing.

Let’s hope for Stu that the Laws of probability don’t even too soon. Wow! Wow! & Wow! First up, read the match report of the D2 game Vs Kissing Point – the Team that was playing D1 before Christmas.

Some highlights worth calling out:

Now on to the records.

In terms of Club low scores, the lowest in our history was when our B1 side was dismissed for 4 runs in the Grand Final played against Perseverance at Campbell Park in 1967/68. The flip side – the highest score

From the sublime to the ridiculous. The highest score in the Association’s history is 725 scored by Beecroft at Parklands Oval in the B2 Grade Grand Final.

A few things about this game: When will they ever learn

Whilst in the mood for theme music what better than a classic by a 1960s folk group – Peter, Paul & Mary – here

The following story from Simon ‘Snumpty’ Smyth says it all:

“Ryan Gunn and Matty Digby we’re both warned last week about the original A Grade fine from the 90’s – wearing socks and sandles.

They turned up again Sporting this ‘fashion’ this week, and the team were rolled for 41. How about Rob Knapman (B1 Red Skipper). For those who haven’t see much of Rob these days it because he has lost 50 kilo’s in the past 12 months – and still going. Check out the photo of the coin toss at the Sheep Station Trophy on Saturday and see the amazing transformation. Knapper is on left with Rick Turner. Chris Williamson (B1 Blue) has a great history in making good personal choices. His latest effort is getting engaged to the beautiful Alexa Ploszczyniec (photo).

Alexa also obviously has remarkably good judgement getting engaged to Chris. So…Alexa, the lady with proven good judgement went to her first cricket game to watch Chris last week and had the opportunity, some would say misfortune, to see the ratbags that Chris has to play with. Anyway, she noticed an obvious close rapport between Eric and Macca – sharing food, looking into each others eyes and having good banter. Quiet innocently she asked how long they had been a couple.

Having had to think about it for a while, it was explained that they were just good friends.